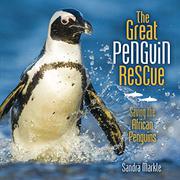 Scientists use varied approaches to rescue and restore a dwindling penguin population in South Africa and Namibia.

Penguins are birds Markle has studied and written about before, and they make an ideal subject for this companion to her accounts of conservation efforts for Brazil’s golden lion tamarins and Russia’s snow leopards. The stories are similar. The penguin species called African penguins nest on beaches and islands in the southwestern part of that continent. Once numbering in the millions, their population was greatly reduced due to human harvesting of the guano in which they dug their nests, the eggs they laid, and the fish they ate. Climate change and oil spills have also taken their tolls. From the opening focus on a hopeful, hungry, apparently abandoned chick to the final pages describing its rescue and return, readers will be enthralled by this relatively optimistic, though still evolving, story, which is enhanced by solid backmatter. The text is smoothly written. Clear, concise explanations show how human actions have led these birds to the edge of extinction and how humans now work to help: protecting nesting and fishing grounds, rescuing and relocating oiled birds, and even hatching, rearing, and returning chicks to the wild. The thoughtful design gives prominence to the irresistible photographs from many different photographers.