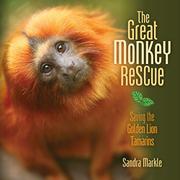 Markle chronicles the amazing efforts to save a tiny (and adorable) species.

In 1960 there were only an estimated 200 golden lion tamarins in the wild. Their habitat along the coast of Brazil was being destroyed by logging. In 1975 there were about 122 in captivity, but they weren’t breeding; when they did, the young died. After laying out this grim reality, the economical text goes on to describe how zoologist Devra Kleiman discovered that golden lion tamarins had a different family structure than chimps and other primates. When the tamarins were housed appropriately, their populations in captivity skyrocketed, reaching 500 in the ’80s. Efforts then began to reintroduce them to the wild. Initial attempts failed, but mixing wild-born tamarins with zoo-born worked; then came the push to expand their available habitats. Markle does her usual excellent job presenting information in a page-turning narrative young zoologists will not be able to put down. Varied page layouts, vibrant photographs, and charming monkey mugs boost appeal. Contextual definitions of difficult or new concepts and fine backmatter, including further resources (both Web and print), a glossary, and a timeline, make this a must for nonfiction collections seeking more than just-the-facts series animal titles.

An animal conservation tale with a happy ending (3,200 estimated in the wild today) and a must-read for monkey lovers.