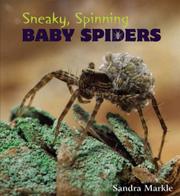 Sneaky Sandra Markle has done it again, providing a thorough introduction to an animal—spiders, here—through striking photographs and clear, engaging text about its young. As she did with sharks and frogs, she uses her readers’ natural interest in childhood to extend their knowledge, discussing how spiderlings are born, how they live and stay safe and the kinds of changes they undergo as they grow up. Her organization is both topical and chronological, using examples ranging from the black-and-yellow garden spider, found in the eastern United States and elsewhere in the temperate northern hemisphere, to the garden-orb web spider of New Zealand. A map shows where each spider was photographed and also serves as an index. Close-up photographs from a variety of sources are identified in context; unfortunately, with one exception, there is no indication of the magnification involved even in the microscopic view of spinnerets. An afterword about spider value, some further curious facts and a glossary that, like the map, does double duty as an index to terms, complete this valuable and intriguing package. (Nonfiction. 5-10)