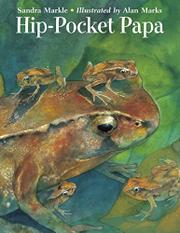 Building on the appealing notion of nurturing fathers, Markle and Marks present this tiny Australian frog in the context of its natural environment. Both male and female hip-pocket frogs guard their developing eggs, but after they’ve hatched, the male keeps his tadpoles safe in hip pockets until they have used up their yolks and developed lungs. The poetic text follows one male journeying to a new and wetter home, describing the creatures he eats and those that want to eat him along the way. Without explicitly using the phrase, she even offers an example of the food chain: A quoll catches the dusky antechinus hunting the frog. These and other Australian animals from the story are further described in an animal glossary at the end. The detailed, realistic watercolor-and-pencil illustrations, mostly double-page spreads, provide a frog’s-eye view of the shadowy forest floor, pulling out to show predators overhead and, once, for a panorama of the temperate rainforest. This intriguing, informative introduction is a worthy successor to the team’s Finding Home (2008). (author’s note, facts, further sources) (Informational picture book. 5-8)