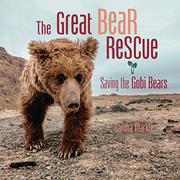 A highly endangered strain of grizzly bears, protected and supported by the Mongolian government in their Gobi Desert home, may slowly be coming back.

Markle clearly and efficiently introduces a bear unfamiliar to most North American readers, its equally unfamiliar environment, and an international effort to save a species. Her long experience in writing about science for young readers shows in the careful crafting and pacing of her exposition. She frames her narrative with an individual bear’s difficult choice: between feared humans and essential water. She provides the necessary background (including three helpful maps), describing the bears, their desert world, and the international team of Mongolian and Western researchers and citizens who have worked to preserve habitat and provide food. Thoughtful design helps readers track the exposition and identify the side topics. Well-chosen and -captioned photographs from a variety of sources show the bears, other native wildlife, researchers, local farmers and children, and even the “ninja miners” (as they’re known in Mongolia) whose illegal search for gold threatens the progress that’s been made to save a species uniquely adapted for this harsh environment. (There may be only 40 Gobi bears remaining.) The writer concludes with a quote from scientist Harry Reynolds (a White American researcher), who describes his work as “continuing to give the bears a chance,” and a single page reminding readers that “Polar Bears Need Help Too.” (This book was reviewed digitally with 9.75-by-19.5-inch double-page spreads viewed at actual size.)

Not a story of salvation but a work in progress, ably explained.