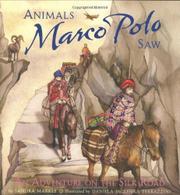 An Adventure on the Silk Road

In the late 13th century, 17-year-old Marco Polo set out for Cathay (China) with his father and uncle. They followed the legendary Silk Road to the palaces of the Kublai Khan, for whom they worked for 17 years before returning to Venice, where Polo later told his story. Markle describes his adventures chronologically for young readers. Most episodes are related on a single page opposite Terrazzini’s attractive, detailed mixed-media illustrations, rendered in dark tones that reflect the dangers of the journey. A separate entry on each page includes information about an animal that Polo might have seen. In spite of the title, as with others in this series the animals are an addendum rather than the focus of the narrative. This attractive introduction to Polo’s famous trip stumbles twice, misnaming the Khan’s summer home and omitting from the map Polo’s travels to India and return home. A fourth volume in the author’s Explorers series, Animals Charles Darwin Saw (ISBN: 978-0-8118-5049-0, illustrated by Zina Saunders), appeared in February 2009 in conjunction with Darwin’s 200th anniversary. (glossary, for more information, index) (Nonfiction. 7-10)