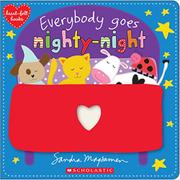 From the Heart-Felt series

Cute animals are reassured and tucked into bed under lift-the-flap blankets.

Part of the Heart-Felt series, this sugary bedtime tale shows a series of anthropomorphic animals bedding down for the night. The animals are flat and cartoonish, all bright colors and patterns, each outlined with faux hand-stitching, as though they have been quilted onto the page. Each spread shows the head or ears of an animal peeking over the “blanket” flap on recto. Very young toddlers might enjoy using these clues to guess who is underneath, but since the text often immediately announces the answer, that game loses some of its punch. What’s hiding under the flaps isn’t especially scintillating either. On some pages, it’s a mild surprise to find not just one, but several animals snuggled underneath, but most flap turns simply reveal legs. A red felt lift-the-flap “blanket” on the cover is unlikely to rip but isn’t exactly the cuddliest material. Loopy, casually handwritten text sprawls across the versos, with occasional highlighted words composed of decorated multicolored letters. The rhyming text is as saccharine as the illustrations, with multiple “we love you” declarations. Strangely, the last page features an energetic line about parents needing sleep so they can wake up ready to tickle, a choice that counteracts much of the previously gentle language intended to induce sleep.