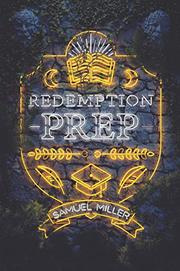 In a remote part of Utah, in a “temple of excellence,” the best of the best are recruited to nurture their talents.

Redemption Preparatory is a cross between the Vatican and a top-secret research facility: The school is rooted in Christian ideology (but very few students are Christian), Mass is compulsory, cameras capture everything, and “maintenance” workers carry Tasers. When talented poet Emma disappears, three students, distrusting of the school administration, launch their own investigation. Brilliant chemist Neesha believes Emma has run away to avoid taking the heat for the duo’s illegal drug enterprise. Her boyfriend, an athlete called Aiden, naturally wants to find her. Evan, a chess prodigy who relies on patterns and has difficulty processing social signals, believes he knows Emma better than anyone. While the school is an insidious character on its own and the big reveal is slightly psychologically disturbing, Evan’s positioning as a tragic hero with an uncertain fate—which is connected to his stalking of Emma (even before her disappearance)—is far more unsettling. The ’90s setting provides the backdrop for tongue-in-cheek technological references but doesn’t do anything for the plot. Student testimonials and voice-to-text transcripts punctuate the three-way third-person narration that alternates among Neesha, Evan, and Aiden. Emma, Aiden, and Evan are assumed to be white; Neesha is Indian. Students are from all over the world, including Asia and the Middle East.