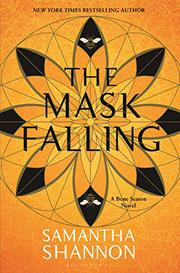 From the Bone Season series, volume 4

The Pale Dreamer is back after narrowly surviving torture at the hands of the clairvoyant-hating Republic of Scion in The Song Rising (2017).

Scion would prefer you to think the Pale Dreamer is dead. And the dreamer herself, Paige Mahoney, is OK with that. The girl from the clairvoyant underworld of London is no more. Since defeating her previous mime-lord, Jaxon, and becoming Underqueen of London’s clairvoyant community–turned-rebellion, Paige has molded herself into the leader known as Black Moth. And while Black Moth has gained a vast following for the rumor that she single-handedly destroyed the clairvoyant-detecting system Senshield, she has barely escaped that victory with her life. After Paige is forced to flee London, the start of this long-awaited fourth installment of Shannon's Bone Season series finds her with her battle armor off, convalescing while in hiding in Paris alongside Arcturus Mesarthim, her controversial guardian and supporter. For those with rusty memories, Arcturus belongs to an immortal race known as the Rephaim, who were forced to leave the Netherworld as their home fell to ruins. Scion’s biggest secret is that it’s run by the Rephaim behind the scenes, most notably by Nashira Sargas, who seeks to control the world’s clairvoyant community to serve the Rephaim. Arcturus defied Nashira to help Paige seek rebellion, and now this oddly matched pair are bound to one another. Paige barely has time to rest when a new underground group, the Domino Programme, comes knocking. This network of free-world spies wants her help as they attempt to undercut Scion—which is planning to invade the Iberian Peninsula—from the inside using Paige’s gift as a Dreamwalker. Not used to taking orders, Paige balances risky operations within the inner circles of Scion leadership while trying to establish connections with the Paris clairvoyant syndicate. Between her duties as an agent as well as Black Moth, coupled with the exhausting will they, won’t they bit with Arcturus, it’s enough to make Paige literally out of breath. The constant slew of injuries, action scenes, and near-death escapes, which further shift the series’ genre from fantasy toward the dystopian realm, distracts from the excellent worldbuilding that is the tale’s beating heart. Sticking with Paige to the end will leave you with new secrets about the Rephaim and Scion’s future plans, along with an emerging threat that is sure to surprise—and will give readers hope that we have yet to learn everything about the potential of human clairvoyance. Thrilling, indeed.

A tantalizing, strategic setup for the next installment, which has all the ingredients to be a knockout.