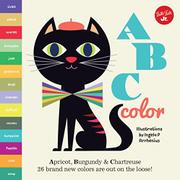 From the Little Concepts series

From “apricot” to “zomp,” an introduction for little ones to little-known Pantone colors.

The first two introductory double-page spreads remind readers about the “colors you may already know,” such as red, orange, yellow, blue, green, and purple. The following 13 spreads present a bevy of additional hues, each beginning with a subsequent letter of the alphabet. On the G and H pages, “goldenrod” and “honeydew” are paired, and readers see a passenger with brown skin being driven by a white driver in a goldenrod taxi with a honeydew stripe. While many of these new shades are enticing and make for intriguing combinations (such as the “onyx” and “persimmon” match-up that’s depicted by a black cat sporting rosy-orange features and accessories), others seem to point to names of colors found only in clothing catalogs (“quartz” for gray, “daffodil” for yellow, and “razzmatazz” for, presumably, raspberry). Arrhenius’ art is playful and includes bold, graphically striking designs of various animals and people with endearing faces. The final pages review the alphabet and the colors depicted in the subsequent spreads.

For readers who can get past the head-scratching color names (would anyone guess that “xanadu” is actually greenish gray?), it’s a fun, new take on the color concept book.