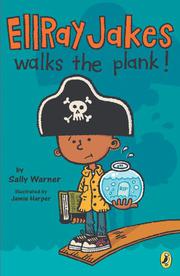 From the EllRay Jakes series

The third installment in this series about third-grader with a penchant for "messing up" (EllRay Jakes Is Not a Chicken, 2011, etc.) revisits an unfortunately evergreen theme from the first book: bullying.

This time, EllRay's misguided, although goodhearted, decision to allow his 4-year-old sister, Alfie, to help take care of the class fish that he's housing over spring break results in Zip's death, and troubles cascade from there. Distracted, EllRay forgets to bring in Treasure Island, the class read-aloud he's borrowed, and his classmates begin to get angry. To make matters worse, mean girl Cynthia Harbison continually tries to pin her transgressions (cheating at a playground game; a classroom shoving match) on EllRay, since "You're already the kid in our class who messes up." With some subtle support from Ms. Sanchez and the principal, EllRay manages to deliver the message to Cynthia that he won't be a patsy. As in previous series entries, EllRay is likable and his problems believable; again, the ending is a bit pat but satisfying nonetheless. Drama about Alfie's friendship woes in preschool parallels the main story but is less successful; Alfie's voice is unrealistically mature for a 4-year-old.

The EllRay Jakes stories are just right for his real-life peers; short enough to be read by kids getting comfortable with chapter booksand also enjoyable and authentic.