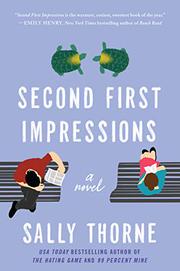 A kindhearted, by-the-book heroine is drawn to a playful, charismatic tattooist.

A preacher’s daughter who was disgraced by making out with her boyfriend on prom night—when said boyfriend went to her father for counseling the next day—25-year-old Ruthie Midona has found refuge as the live-in office manager of the Providence Retirement Villa and creator of a fan forum for a wholesome TV show called Heaven Sent. Just as she’s getting ready to date for the first time since that disastrous prom, other changes threaten her safe routine, including a corporate takeover of the retirement community and the arrival of the new owner's ne’er-do-well son, Teddy Prescott. Though Melanie, the Villa's office temp who's serving as Ruthie's amateur dating coach, judges Teddy as too risky for Ruthie, his disarming behavior undermines Ruthie's pragmatic judgment that he’s a rolling stone. When Teddy needs a place to live and his father lets him move into the Villa if he earns his keep, he becomes the temporary caretaker for two eccentric seniors, and Ruthie glimpses signs of a compassionate character and a skilled artist under his careless facade. Writing from Ruthie’s first-person perspective, Thorne manages to bring all the characters to vivid life, endearing them to the reader through the enumeration of their quirks and fleeting revelations about their pasts. Each scene between the protagonists—whose first meeting will make you laugh and wince simultaneously—is a delight, as is Ruthie’s motley found family. The turning point in Ruthie’s professional and personal arc is unsurprising, but the denouement is joyful in more ways than one.