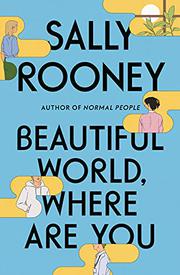 BEAUTIFUL WORLD, WHERE ARE YOU

Two erudite Irishwomen struggle with romance against the backdrop of the Trump/Brexit years.

Eileen and Alice have been friends since their university days. Now in their late 20s, Eileen works as an editorial assistant at a literary magazine in Dublin. Alice is a famous novelist recovering from a psychiatric hospitalization and staying in a large empty rectory on the west coast of Ireland. Since Alice’s breakdown, the two have kept in touch primarily through lengthy emails that alternate between recounting their romantic lives and working through their angst about the current social and political climate. (In one of these letters, Eileen laments that the introduction of plastic has ruined humanity’s aesthetic calibration and in the next paragraph, she’s eager to know if Alice is sleeping with the new man she’s met.) Eileen has spent many years entangled in an occasionally intimate friendship with her teenage crush, a slightly older man named Simon who is a devout Catholic and who works in the Irish Parliament as an assistant. As Eileen and Simon’s relationship becomes more complicated, Alice meets Felix, a warehouse worker who is unsure what to make of her fame and aloofness. In many ways, this book, a work of both philosophy and romantic tragicomedy about the ways people love and hurt one another, is exactly the type of book one would expect Rooney to write out of the political environment of the past few years. But just because the novel is so characteristic of Rooney doesn’t take anything away from its considerable power. As Alice herself puts it, “Humanity on the cusp of extinction [and] here I am writing another email about sex and friendship. What else is there to live for?”

A novel of capacious intelligence and plenty of page-turning emotional drama.