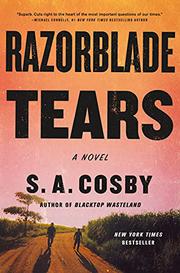 A lean, mean crime story about two bereaved fathers getting their hands bloody.

Coming from the right author, genre fiction has a rare capacity to touch on any number of big ideas: love, death, hatred, violence, freedom, bondage, and redemption, to name just a few. Cosby's latest fits the bill. Fast on its feet, by turns lethal and tender, the story takes place in small-town Virginia, though it could be the backwoods of a great many places. Ike Randolph and Buddy Lee Jenkins, both ex-cons haunted by their pasts, wouldn’t ordinarily mix, largely because Ike is Black and Buddy Lee is White and a casual racist. But the two men are tragically linked. Their sons were married to each other, and they were murdered together, shot in their faces outside a fancy Richmond wine store on their anniversary. The dads are both homophobes, but they also love their sons, so when the police investigation quickly stalls, Ike and Buddy Lee decide to crack a few skulls on their own. Cosby gives us both the charge of once-bad men getting back in touch with their wild sides and the sad reluctance of relatively straight-and-narrow lives turning to vengeance. These old-timers have done bad, bad things, and they’ve done the time to prove it. Now they’re ready to do those things again in the name of a thorny father-son love that neither man is quite comfortable with. Here’s Buddy Lee after a long, hard night with his new friend: “Chopping up your first body is disgusting. Your second is tiresome. When you’re doing your fifteenth it’s all muscle memory.” This is a bloody good yarn with two compelling antiheroes you’ll root for from the start, and not only because their enemies, or at least some of them, belong to a White nationalist biker club with murderous ways of its own. Lean and mean, this is crime fiction with a chip on its shoulder.

Violence and love go hand in hand in this tale of two rough men seeking vengeance for their murdered sons.