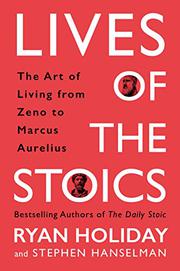 LIVES OF THE STOICS

The Art of Living From Zeno to Marcus Aurelius

An introductory guide to the luminaries of Greco-Roman ethical philosophy—and their checkered histories.

Stoicism is famously prescriptive: Marcus Aurelius’ Meditations is cherished for its aphoristic guidance on virtue and leadership, and Epictetus’ best-known work, Encheiridion, loosely translates to “handbook.” But Holiday and Hanselman, founders of the website the Daily Stoic, avoid a strict how-to approach, instead structuring the book as chronologically arranged pocket biographies of Stoic figures, from Zeno, a merchant who founded the school in Athens in the fourth century B.C.E., to Aurelius, who applied its tenets of calm resilience as Roman emperor in the second century C.E. The approach means there are many filler chapters on lesser-known thinkers like Panaetius, Porcia Cato (a rare woman Stoic), and Thrasea. (Some seem extraneous. The authors have little to say about Diotimus, who wrote some libelous letters. Bad form, but what of it?) The upside of their approach is that it thoughtfully complicates Stoicism. Rather than emphasizing Spock-like, unemotional rigor (as pop culture often does), the authors reveal how the philosophy often debated its identity and how many of the leaders fell short of its ideals. Cicero, for instance, gained fame as a statesman but ran aground thanks to his reputation for self-aggrandizement; Seneca’s seriousness gave him the thankless task of serving as counsel to Nero, who used him as cover for his own despicable actions as Roman emperor. Still, the authors see Stoicism as inherently inspirational, and there are plenty of examples, from corruption-fighters like Publius Rutilius Rufus to Epictetus, who rose from slavery to become a much-admired thinker. The finest Stoics, they write, were “able to focus in even the most distracting of situations, to be able to tune out anything and everything—even creeping death—so that we lock in on what matters.”

At a time when public nobility is hard to come by, this is a good reminder of the power of ethical leadership.