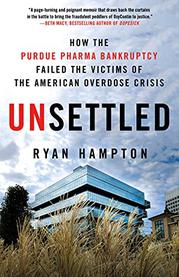 An opioid-victims’ advocate vents his fury about the Purdue Pharma bankruptcy that allowed the Sackler family to avoid prison and keep most of their fortune.

Several years into his recovery from opioid addiction, Hampton had a modest knowledge of the law when the Department of Justice appointed him to the official Unsecured Creditors Committee in the Purdue bankruptcy case. He soon became co-chair of the nine-member group, which included four private citizens as well as institutional heavyweights like CVS Pharmacy and which had a fiduciary duty to thousands of claimants against Purdue. The author combines the sarcasm of an early Bill Bryson travelogue with the disbelief of Alice in Alice’s Adventures in Wonderland in this breezy but informative memoir of his falling down a rabbit hole of negotiation, mediation, and Zoom calls as he pushed for a fair shake for victims. Many of his frustrations involved the Sacklers’ army of nuclear-strength law firms like Jones Day, “the firm that had previously represented such stand-up characters as the R.J. Reynolds Tobacco Company and the bin Laden family.” Other maddening setbacks involved cash grabs by states that hadn’t spent much of the federal money they’d already received to fight the opioid crisis, power plays that deprived victims of urgently needed financial help. Hampton finds it small comfort that Purdue ultimately pleaded guilty to multiple felonies and agreed to pay about $750 million to victims, or up to $48,000 per death from a Purdue product. “This wasn’t a bankruptcy,” writes the author, “it was a heist.” Hampton recaps some of the background on the opioid crisis found in stellar books such as Chris McGreal’s American Overdose and Patrick Radden Keefe’s Empire of Pain, but he offers a unique firsthand perspective on a bankruptcy he credibly portrays as yet another injustice to Purdue’s victims.

A passionate, well-informed insider’s account of one of the most controversial bankruptcies in U.S. history.