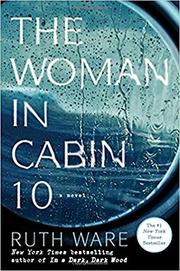 THE WOMAN IN CABIN 10

Ware (In A Dark, Dark Wood, 2015) offers up a classic “paranoid woman” story with a modern twist in this tense, claustrophobic mystery.

Days before departing on a luxury cruise for work, travel journalist Lo Blacklock is the victim of a break-in. Though unharmed, she ends up locked in her own room for several hours before escaping; as a result, she is unable to sleep. By the time she comes onboard the Aurora, Lo is suffering from severe sleep deprivation and possibly even PTSD, so when she hears a big splash from the cabin next door in the middle of the night, “the kind of splash made by a body hitting water,” she can’t prove to security that anything violent has actually occurred. To make matters stranger, there's no record of any passenger traveling in the cabin next to Lo’s, even though Lo herself saw a woman there and even borrowed makeup from her before the first night’s dinner party. Reeling from her own trauma, and faced with proof that she may have been hallucinating, Lo continues to investigate, aided by her ex-boyfriend Ben (who's also writing about the cruise), fighting desperately to find any shred of evidence that she may be right. The cast of characters, their conversations, and the luxurious but confining setting all echo classic Agatha Christie; in fact, the structure of the mystery itself is an old one: a woman insists murder has occurred, everyone else says she’s crazy. But Lo is no wallflower; she is a strong and determined modern heroine who refuses to doubt the evidence of her own instincts. Despite this successful formula, and a whole lot of slowly unraveling tension, the end is somehow unsatisfying. And the newspaper and social media inserts add little depth.

Too much drama at the end detracts from a finely wrought and subtle conundrum.