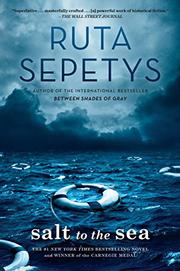 SALT TO THE SEA

Returning to the successful formula of her highly lauded debut, Between Shades of Gray (2011), Sepetys combines research (described in extensive backmatter) with well-crafted fiction to bring to life another little-known story: the sinking (from Soviet torpedoes) of the German ship Wilhelm Gustloff. Told in four alternating voices—Lithuanian nurse Joana, Polish Emilia, Prussian forger Florian, and German soldier Alfred—with often contemporary cadences, this stints on neither history nor fiction. The three sympathetic refugees and their motley companions (especially an orphaned boy and an elderly shoemaker) make it clear that while the Gustloff was a German ship full of German civilians and soldiers during World War II, its sinking was still a tragedy. Only Alfred, stationed on the Gustloff, lacks sympathy; almost a caricature, he is self-delusional, unlikable, a Hitler worshiper. As a vehicle for exposition, however, and a reminder of Germany’s role in the war, he serves an invaluable purpose that almost makes up for the mustache-twirling quality of his petty villainy. The inevitability of the ending (including the loss of several characters) doesn’t change its poignancy, and the short chapters and slowly revealed back stories for each character guarantee the pages keep turning.