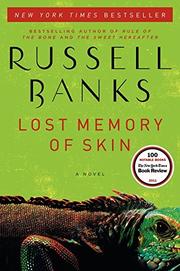 Banks (The Reserve, 2008, etc.) once again explores the plight of the dispossessed, taking a big risk this time by making his protagonist a convicted sex offender.

He hedges his bets slightly: The Kid is a 22-year-old who got jailed for showing up at a 14-year-old girl’s house with condoms, K-Y jelly, porn and beer after some sexy Internet chat. But Banks makes it clear that there are plenty of actual child molesters and “baby bangers” camped out with the Kid under a Florida causeway—because they’re prohibited from living 2,500 feet from any place children under 18 congregate, which is pretty much everywhere. It’s less clear whether the author agrees with the Professor, a sociologist specializing in the causes of homelessness, that pedophilia is a response to feelings of powerlessness and a disease of the modern media world that sexualizes children in advertising. Ambiguity rules in Banks’ knotty narrative of the Kid’s odyssey after police break up the encampment under the causeway (it’s an election year) and he loses his job as a busboy. Was the Professor really a government informer back in the 1960s? Are his former bosses trying to kill him, as he claims? Maybe, but it’s hard to tell. And Banks doesn’t make it easy to like the Kid, addicted to porn since he started watching it on the Internet at age 10 to blot out the sounds of his mother having sex with her various boyfriends, so isolated by his own wounds that other people don’t seem very real to him. Though there’s plenty of plot, including a hurricane and a dead body fished out of a canal, the slow growth of the Kid’s self-knowledge and his empathy for others is the real story, offering the only ray of hope in an otherwise bleak consideration of a broken society and the damaged people it breeds.