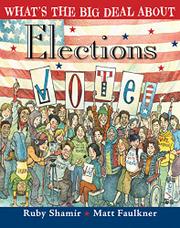 WHAT'S THE BIG DEAL ABOUT ELECTIONS

Shamir and Faulkner take readers on a trip through various moments in U.S. history as they explore the democratic process.

The text begins in 1884, when a young man rides for hours to deliver his local ballot box in the state of Nebraska. The book then jumps in nonlinear fashion from key moment to key moment, explaining its importance: Native Americans were granted citizenship in 1924 (their status as members of sovereign nations goes unmentioned); the emergency number 911 was created in 1968; George Washington was the only presidential candidate ever to run unopposed. The information is divided into general paragraphs that begin with a question and text boxes that supply trivia and provide additional context to the paragraphs. Children’s and teens’ roles are often cited, such as their participation in the civil rights movement and the lowering of the voting age from 21 to 18. The information ranges from national elections to local, expanding on what can be done on a national level and what can occur locally. Along the way, Faulkner includes a diverse mixture of citizens. A range of ethnic groups, minorities, and people of various body sizes and abilities are included, making the book visually welcoming to all readers. An early image depicting a blind woman with both guide dog and cane appears to be the only visual misstep. The backmatter includes a timeline and sources for additional reading.