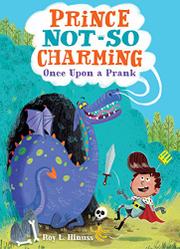 ONCE UPON A PRANK

Prince Carlos Charles Charming dreams of becoming a jester, but his parents want him to do “princely things” like slay dragons.

King Carmine is “a good king” and “a good dad…always loving and patient” with his son. But he hardly ever laughs. When Prince Carlos performs his comedy routine to try to cheer up his father, Carlos doesn’t succeed in eliciting a laugh: Carlos is meant to be a prince, not a jester. After obediently donning his suit of armor, Carlos finds solace in the company of Jack the Jester, who shares Carlos’ affinity for scatological humor. But his consolation is short-lived: His mother, “big woman” Queen Cora (she has “an even bigger personality”), finds and compels him to train with Prince Gilbert the Gallant, who is kind but aggravatingly perfect. Carlos’ torment is cut short but then increased when his father—even though he knows that Carlos is ill-prepared—sends him out to slay a dragon. Carlos comforts himself with a comedy routine as he heads toward his fate, and the noise draws the attention of the dragon, who, unsurprisingly (to readers, anyway), is not what Carlos expected. Spot illustrations portray Jack the Jester and Prince Gilbert as brown-skinned, while Carlos and his father share “the same light tan skin.”

Fans of fart jokes and humor may be able to overlook the flaws (such as the paucity of intelligent female characters) in this quick read.