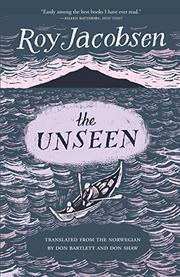 Norwegian novelist Jacobsen folds a quietly powerful coming-of-age story into a rendition of daily life on one of Norway’s rural islands a hundred years ago in a novel that was shortlisted for the 2017 Man Booker International Prize.

Ingrid Barrøy, her father, Hans, mother, Maria, grandfather Martin, and slightly addled aunt Barbro are the owners and sole inhabitants of Barrøy Island, one of numerous small family-owned islands in an area of Norway barely touched by the outside world. The novel follows Ingrid from age 3 through a carefree early childhood of endless small chores, simple pleasures, and unquestioned familial love into her more ambivalent adolescence attending school off the island and becoming aware of the outside world, then finally into young womanhood when she must make difficult choices. Readers will share Ingrid’s adoration of her father, whose sense of responsibility conflicts with his romantic nature. He adores Maria, despite what he calls her “la-di-da” ways, and is devoted to Ingrid. Twice he finds work on the mainland for his sister, Barbro, but, afraid she’ll be unhappy, he brings her home both times. Rooted to the land where he farms and tied to the sea where he fishes, Hans struggles to maintain his family’s hardscrabble existence on an island where every repair is a struggle against the elements. But his efforts are Sisyphean. Life as a Barrøy on Barrøy remains precarious. Changes do occur in men’s and women’s roles, reflected in part by who gets a literal chair to sit on at meals, while world crises—a war, Sweden’s financial troubles—have unexpected impact. Yet the drama here occurs in small increments, season by season, following nature’s rhythm through deaths and births, moments of joy and deep sorrow. The translator’s decision to use roughly translated phrases in conversation—i.e., “Tha’s goen’ nohvar” for "You’re going nowhere")—slows the reading down at first but ends up drawing readers more deeply into the world of Barrøy and its prickly, intensely alive inhabitants.

A deeply satisfying novel, both sensuously vivid and remarkably poignant.