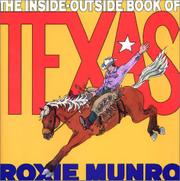 THE INSIDE-OUTSIDE BOOK OF TEXAS

In another inside-outside book, Munro tackles the big state of Texas in a giant-sized format and vividly colorful style. While similar in many ways to previous titles in her series, the palette here is particularly bold and vibrant. The routine and expected sites such as the Alamo and Dallas skyline are paired with less-well-known sites like Palo Duro Canyon, the Antique Sewing Machine Museum, and the Devil's Rope Museum—devoted to barb wire. Sometimes the choices of illustration are puzzling as a spread, including a busy harbor, labeled "shrimp in Port Isabel," which only shows tiny pink sploshes of color in a cooler. Another labeled "Lyndon B. Johnson Space Center, Houston" appears to be the view from inside a space helmet, until the page is turned to reveal it's really outside the neutral buoyancy lab where folks are inside, floating in liquid. A map and informative five pages of text follow colorful illustrations with these minimal labels. Piquing children's interest before dosing them with fascinating facts and trivia makes this a lively read that bears study. Not adequate for reports, it does work as an enticement for tourists. True Texans may quibble at what is not included, but given a state with the fourth and ninth largest cities in the United States along with vast rural areas, it probably isn't possible to cover everything. (Nonfiction. 4-8)