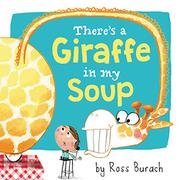 THERE'S A GIRAFFE IN MY SOUP

A little boy pops into a restaurant expecting a delicious bowl of tomato soup. Instead, he encounters a whole zoo-ful of animals in his soup. Hilarity ensues. First, a bowl with a gangly giraffe arrives at his table. This is followed by an alligator with an appetite for children and then a host of animals including a drowning elephant, a sleeping koala, and, ultimately, a massive blue whale. Giving up on soup, the boy decides to go straight to dessert. Alas, the waiter can’t get that right either! While the dialogue is succinct and simple, attempts at wordplay are more contrived than clever. “ ‘YAK! YAK! YAK!’ ‘Yuck? Yuck? Yuck? / Oh. YAK. Yuck.’ ” Later, the waiter thinks the boy is accusing him of lying when he’s warning him about a lion. However, Burach’s illustrations more than make up for this shortfall. Dynamic angles and multiple points of view ensure that the colorful characters leap off the stark white pages. Double-page spreads emphasize size and heft. Amusing facial expressions animate the characters, and googly eyes and rosy cheeks make even normally scary creatures seem cute and docile. Plus, brilliant use of the front endpapers starts the story with an unexpected prologue.

A zany read-aloud book for the youngest of diners.