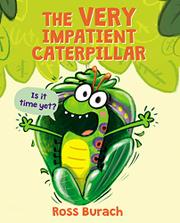 Not every caterpillar gets the memo—or is, for that matter, temperamentally suited to spending two weeks immobilized in a chrysalis.

Seeing everyone headed up a tree (“We’re going to metamorphosize.” “Meta-WHAT-now?”) a clueless caterpillar hurries to follow. Despite the promise of a dazzling transformation, every step in the natural process, from spinning a chrysalis on, is an occasion for histrionic dismay (“It’s STILL Day 1?” “This is taking FOR-EV-ER!”). Gradually, though, the pop-eyed pupa’s kvetching quiets, the moans and groans turn to meditation (“Be one with the chrysalis”), and two weeks later: “I did it! I’m a BUTTERFLY!” Burach chronicles this miracle of nature in cartoon scenes as loud as the rapid patter, culminating in a migratory flight of butterflies and a final “ARE WE THERE YET?!” that hints at a character transformation that’s perhaps less complete than the physical one. It won’t be just adults chuckling at the interactions between the title character and its patiently pupating companions; all the characters speak in dialogue balloons, the protagonist’s green with purple text to match its chrysalis.

An object lesson in the value of patience as well as a droll introduction to meta-what-now.