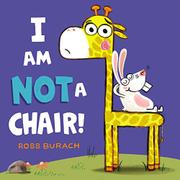 I AM NOT A CHAIR!

A beleaguered giraffe tries to communicate that he isn’t a chair.

Poor Giraffe: on his first day in the jungle he’s seen as a chair by the other animals. Of course, giraffes aren’t actually found in jungles, and there’s little evidence of a jungle in the illustrations. While Giraffe does look a little like a chair, the fact that he has eyes and a mouth and nose and other features that distinguish the other animals from their seats makes it hard to understand why he is mistaken for a chair. But it’s all about the gag. Burach uses action-filled spreads to indicate a series of incidents that literally impede Giraffe’s speech, but when he is finally able to speak up for himself, he chooses instead to make a fake chair that looks like him. When that doesn’t work, he’s taken home by a dull-witted human who also uses him for a chair. Upon escaping, he is used as a chair by a lion waiting for dinner. When Giraffe finally decides to speak up and clear up the misunderstanding, he saves his own skin by scaring the lion, who thinks he’s a talking chair. The childlike drawings emphasize googly eyes, silly grins, a multitude of sound effects in emphatic display type, and lots of physical humor.

While the slapstick may appeal to readers, sadly, this book is so confused and arbitrary, most of the humor falls flat.