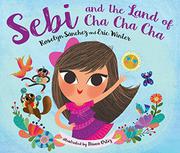 SEBI AND THE LAND OF CHA CHA CHA

A curious young Latina and her friend learn three Latin dances as taught by a collection of step-savvy tropical animals.

Written by film and TV stars Sánchez and Winter with a lead character based on their daughter, Sebella, this picture book focuses on a child’s introduction to what’s rather generically referred to as “Latin dancing.” More specifically, Sebi and her friend Keeke (a pale-skinned child with a thatch of blond hair) learn the cha-cha, the samba, and the merengue from squirrels, monkeys, and cockatoos after stumbling upon a secret dance land after getting lost in some bushes at a park. Ortiz’s illustrations teem with rosy-cheeked figures (even the monkeys and the sun), curvy flora, and joyful movement, as each edge-to-edge image bursts with life. But the dances themselves, explained with detail in the text (“Bend one knee at a time. The more you bend, the more your hips swing”), never quite go beyond hip-swaying poses. Sebi and Keeke catch on, but it’s unlikely any kids will be able to follow the steps through pictures. Beyond the names of the dances, a half-hearted attempt at including Spanish phrases unnecessarily doublespeaks almost every bit of non-English, even such words as “Fantástico!” that perhaps didn’t need the clunky translation.

The invitation to discover dance among such festive critters is still worth accepting. It could serve as an imaginative introduction to new genres of music and movement.