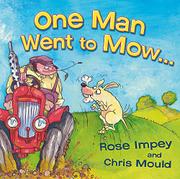 A digging pooch turns a meadow into a field of buried treasure. In cumulative “The House That Jack Built” fashion, Impey’s tale of canine mischief begins when Spot buries a bone while his master takes the tractor out to mow the meadow. When the master adds a man, Spot buries a garden gnome; three men, and it’s a brass trombone. And so on to seven, when Spot buries “the key to get home,” leaving all seven bemused men to dig up the meadow in the dark. The lack of exact rhymes is especially bothersome (“gnome” rhyming with both “bone” and “scones”) because the text is so minimal, but Mould’s illustrations are deliciously quirky, with a hint of Gahan Wilson wackiness. Parents of children ensnared by the rhythmic accumulation will enjoy such details as a running visual joke that involves Spot’s theft of the various items from a tough bulldog and the clear imprint of fossil shells in the “flat black stone.” Still, clear as Spot’s actions are, the men’s accomplishments are murkier, making this one ultimately forgettable. (Picture book. 3-5)