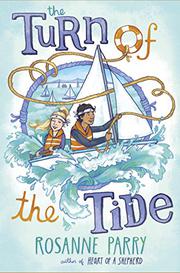 THE TURN OF THE TIDE

After a tsunami destroys their community, Kai’s parents, busy repairing a power plant, send him to Astoria, Oregon, to stay with relatives he barely knows, including his cousin Jet, whose ambition is to pilot ships across the dangerous Columbia River bar.

His white father grew up in Astoria, but Kai, raised in Japan, identifies as Japanese. Being biracial in a culture that values conformity becomes more challenging than ever after his failed, maverick attempt to rescue his grandparents. Equally adrift, Jet doesn’t share friends Bridgie and Skye’s obsession with shopping and boyfriends; another old friend has found a new pal to sail with. Jet’s thrilled that Kai sails too, but she’s blinded by her single-minded focus on sailing. Accepting Kai’s help to repair her boat and crew in the Treasure Island Race, she forgets his trauma; pushing him into the water too soon nearly sinks their friendship. Kai had wanted to stay and help rebuild his Japanese town; he suspects fitting in will be harder when he returns. “Not so easy to be a boy between cultures,” Uncle Per says, then points out, “Lots of mariners are like you—a foot in more than one place. Captain a ship and you’re a citizen of the whole world.” Parry tells her story in third-person chapters that alternate perspective between Kai and Jet, effectively getting readers under the skin of both.

Thematically rich, by turns exciting and reflective, this affectionate homage to the mariner life celebrates human commonality and difference in an increasingly interconnected world.