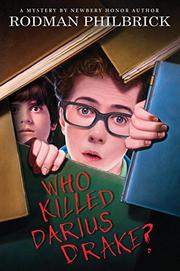 In a typical Philbrick (The Big Dark, 2016, etc.) combination of humor and insight, two kids become unlikely partners in detection.

In this comfortable whodunit for readers discovering the genre, genius white orphan Darius takes the role of lead investigator, while fat white kid Arthur Bash narrates the unfolding plot. “Thug-for-hire” Arthur, also known as Bash Man, plays the role of class heavy, taking payment in candy bars from kids who want someone scared. Darius offers Arthur three Snickers bars to win his protection as he investigates the note—written in blood—asking, “Who killed Darius Drake?” Soon both boys are headed into the scary Stompanado projects and confronting the legendary Scar Man. It’s all somehow connected to the mysterious disappearance of a diamond necklace estimated to be worth $15 million. With the addition of Deirdre, Arthur’s bubbly white stepsister, the detective team is off and running through libraries and official records as well as contacting a local historian. Frighteningly perilous encounters ensue. While readers will ID the bad guy, there are enough red herrings to keep them engaged along the way. Throughout, it becomes clear to both readers and kids that the old saw Arthur quotes, “never judge a book by its cover,” applies to all concerned: smarter-than-he-acts Arthur, frightening Scar Man, and their down-and-out postindustrial town—Philbrick’s interrogations of class assumptions are pointed.

A smart and worthy mystery.