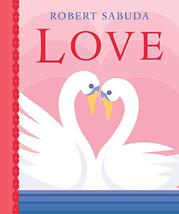 A pop-up apotheosis in the “I love you more than anything” genre.

The panjandrum of paper engineering presents a repeated “I love you…” on alternate flat spreads; he completes them with six animal pop-ups depicting peer or parental relationships and captioned by ways of loving. These range from “exactly the way you are,” for a crab carrying on its back a large sea anemone that unfolds spectacularly as the page turns, to “and will encourage you to do great things,” paired to a trio of polar bears sliding exuberantly down a snowy slope. Though his complex, inventive pop-ups are (as usual) mostly fashioned from heavy, white paper, he makes particularly fine use of color both in the minimalist backgrounds, where hues evoke diverse seasons or habitats, and in the figures themselves. The anemone, for instance, shines in shades of orange, and the yellow and purple bills of two facing swans on the final spread give the heart shape formed by their heads and necks an intimate glow. Though the theme of reassurance is simpler, or at least less abstract, than that in his most recent outing, Believe: A Pop-Up Book of Possibilities (2019), the art again invites both wonder and broader, extended reflections on the meaning of the words. Alas, poor type contrast on some spreads may have readers struggling to find them.

Sincere rather than sloppily sentimental…and, as ever, a marvel of intricate design.