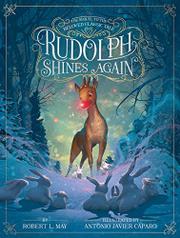 by Robert L. May ; illustrated by Antonio Javier Caparo

In this sequel to the original story about the famous reindeer with a glowing red nose, Rudolph loses his special power and then gains it back after helping find two lost bunnies.

In the month before Christmas, Rudolph suffers a crisis of confidence and loses the red glow that has made him the leader of Santa’s reindeer team. He worries and whines, concentrating on his loss, finally deciding to run away and find a new home in a different country. Deep in a forest at night, he finds a group of distressed rabbits who have lost two of their babies. Rudolph helps them, finding bunnies Donnie and Doris, and in focusing on the troubles of others, he regains his confidence as well as the glow on his nose. He flies home in time for Christmas Eve deliveries, including a special package dropped from Santa’s sleigh for his new rabbit friends. Caparo’s handsome illustrations in an oversize format are in the same style as his work in the recent edition of the original story, Rudolph the Red-Nosed Reindeer (2014). The color palette focuses on deep midnight blues with swirls of pink sparkles around Santa and the reindeer symbolizing their magical powers. The long, rhyming text, however, is dated in tone and has a grating, singsong quality and some rhymes that fall flat. It’s unfortunate that the text is not of the same quality as the illustrations, design, and high-quality paper.

Those who appreciated Caparo’s illustrations in the original edition will also like this sequel and will probably overlook the unsuccessful story.