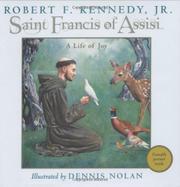 A Life of Joy

A saint’s biography written by a celebrity author and illustrated by an artist best known for Fairy Wings, one is hard pressed to treat this with respect. Francis of Assisi is so engaging a character—the wealthy merchant’s son who gives up all to serve the poor and bless the beasts of the field. Kennedy treats the story as if it were a legal brief, making sure we don’t miss A Single Point he’s trying to make. Sometimes, though, the facts are unclear: Francis’s mother, named Consuela in this account, is named Pica in the Catholic Encyclopedia and one wonders if a 13th-century Italian would have known British Arthur and his Knights of the Round Table. The narrative in any case neither flows nor sings. While Nolan’s pictures have a wonderful texture, whether of cloth, stone or landscape, it looks as though a different model for Francis was used in each panel, and the one of Francis falling from his horse is just laughable. Skip the “Frameable portrait inside” and go with Michael Bedard’s The Wolf of Gubbio (2001) or Guido Visconti’s Clare and Francis (2004). (author’s note, timeline) (Picture book/biography. 7-9)