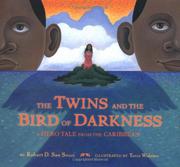 THE TWINS AND THE BIRD OF DARKNESS

A Hero Tale from the Caribbean

San Souci (The Birds of Killingworth, p. 572, etc.), one of the premier promoters of the folkloric tradition, always provides a careful author’s note detailing the origins of his stories, several of which have recently come from the Caribbean. This tale comes from Guadeloupe and the author states that it “is composited in the main from thirteen variant tales” collected by Elsie Clews Parsons as well as other tales by Philip Sherlock and Lafcadio Hearn. San Souci also mentions that the story has European roots. The motifs in the story, the good brother and the evil brother; the princess who has to be rescued, and the slaying of a monster with the help of magic, are all common enough in many cultures and usually make for an exciting story. The text has its dramatic high points, but unfortunately, the narrative is undermined by the illustrations. With the exaggeration and cartoon-like style of Widener’s (If the Shoe Fits, p. 189, etc.) paintings, this hero tale seems less than heroic. Sure, the princess is rescued, but the beads of sweat all over the hero’s body, when he tries to get out of the ravine into which he has fallen, look like a grade-B comic book. The large eyes and round heads of the characters have a silly, almost stereotypical look that just doesn’t work with this type of serious traditional tale. The clothing and the palace do not belong in the Caribbean. Only when the Bird of Darkness with its seven rainbow-colored heads appears, does the book reverberate with any real power. (author’s note) (Picture book/folktale. 8-12)