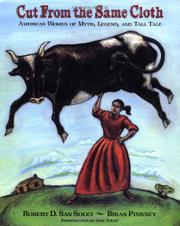 CUT FROM THE SAME CLOTH

A frequent author retells old stories and, in effect, fashions new ones to fill a void that—he says in his preface—he deplores. Arranged geographically from northeast to west (including Alaska and Hawaii), these 15 tales of clever, strong- willed, or larger-than-life women represent several cultures- -Anglo-, Native-, African-, and Mexican-American. Introductory remarks discuss locale or culture or note parallels in world folklore. The results are entertaining and often tellable. Yet San Souci alters stories to suit his purpose: e.g., the woman he calls ``Old Sally Cato'' is unnamed in his Missouri source, while the male giant she kills was ``Bally Sally Cato''; even the African-American connection seems tenuous. Compared to one cited source, ``Annie Christmas'' is cleaned up almost beyond recognition. Neither is the subtitle quite accurate: two protagonists are sisters under the fur. And while the animal tales enhance ethnicity (``Sister Fox...'' is the only Mexican American tale), they have a mean-spirited tone not found in the others. Detailed notes give clues to how much San Souci has embellished, rather than ``collected,'' here; Pinkney's handsome b&w scratchboard illustrations and a spacious layout give the book a distinguished look. As they stand, the stories are useful; but it would be more honest to explain the rationale for the substantial revisions. Brief introduction by Jane Yolen; map; bibliography. (Folklore. 8+)