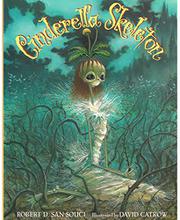 This fancy little piece of septet versifying works nicely as a vehicle to tell the story of the graveyard Cinderella. San Souci (Callie Ann and Mistah Bear, p. 1045, etc.) follows the original tale quite closely, substituting things from the bone orchard where appropriate: her coach is a hearse; the prince is named Charnel; her stepfamily is Skreech, Gristlene, and Bony-Jane; and, of course, she herself is a skeleton. Instead of simply losing her slipper at the ball, this Cinderella has her lower tibia snapped off. (Picture the prince traveling everywhere with the foot in a velvet case.) Yes, there are touches of the macabre here (each prospective bride pulls her own foot off to try on Cinderella’s), but never overmuch or to the point of terrifying. And most of it is hysterically funny. San Souci’s verse ultimately takes the show: “Cinderella Skeleton! / The rarest gem the world has seen! / Your gleaming skull and burnished bones, / Your teeth like polished kidney stones, / Your dampish silks and dankish hair, / There’s nothing like you anywhere! / You make each day a Halloween.” What a picture she makes. Catrow’s (The Fungus That Ate My School, p. 474, etc.) artwork is reminiscent of The Nightmare Before Christmas—perhaps that can’t be helped when skeletons are the principals—but very much its own thing, with abundant cartoony comic licks and ghoulish creatures galore. (Picture book. 3-7)