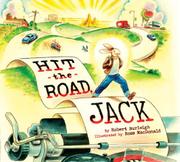 What could have been straight nonfiction takes on a fanciful air when Jack Kerouac is rendered more jack rabbit than man.

In an effort to make the life of Jack comprehensible to elementary-age children, Burleigh’s rhyming text does double duty as both biographical ode to a great writer and paean to the country he loved. “Hey, Jack! Skedaddle! Gotta hop! / Vamoose! Take off and go! / Nose is itching, ears are twitching, / Come on! Get with the flow!” Feeling the urge to travel, Jack sets off from New York City to the countryside, seeing people, enjoying the road and heading westward all the while. With a ubiquitous blue jay companion, this Jack is a swell sport fully capable of fueling readers' desires to see the world as well. Only sometimes does the book’s internal logic go awry, as when the bunnified beat passes the very human heads of Mount Rushmore. While Burleigh sells Jack’s wayward spirit, MacDonald works to capture 1950s America to a tee. And though these bunny characters seem to be human from the neck down, readers will not fault the artist this child-friendly touch.

Appropriately for the audience, this charmer invokes the man's spirit rather than his biography, effectively communicating the excitement of the road he held so dear.