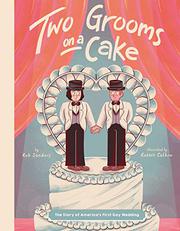 TWO GROOMS ON A CAKE

The two groom figurines on the top of the cake at the first legal same-sex wedding celebration narrate the story of Jack and Michael, who met in 1966. The cake-topping grooms compare the creation of the cake they will stand on to the growing relationship of the couple and then to their struggle to get a marriage license, which includes law school, a name change (from Jack to the gender-neutral Pat), and a solo visit to City Hall for the license (for Michael). The cake is finished; the license is granted. Michael and Jack celebrate their wedding…but the battle for equality is far from over. Fifty years on, the couple is even more in love, and finally LGBTQ+ couples can marry in all 50 states. Sanders tells the tale in easy-to-understand language, sweet as the frosting on the cake, and leaves the bulk of the details for the comprehensive backmatter: author’s note, marriage equality timeline, photographs of Jack and Michael as young and older men, and a well-rounded bibliography. Cathro’s whimsical, retro-feeling illustrations on cream-colored paper show the cake toppers assisting in the creation of the cake as their human counterparts work for the right to marry. Both cake toppers and human grooms present White. (This book was reviewed digitally.)

As beautiful as it is informative about this little-known battle in the fight for equality.