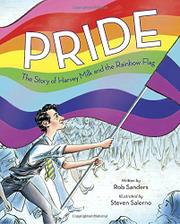 The Story of Harvey Milk and the Rainbow Flag

A hope-filled ode to the rainbow flag, the LGBTQ rights movement’s most prominent symbol.

The flag’s story begins with Harvey Milk, a young man with a “dream” for equality. In 1977, Milk becomes one of the first openly gay people to be elected to U.S. political office. As Milk marches toward his dream through protests and rallies, he works with artist Gilbert Baker to come up with a unifying symbol for the movement. In 1978, the rainbow flag makes its debut in San Francisco. Later that year, Milk is assassinated, but the flag continues to unify, sending his message of hope to LGBTQ individuals all over the world. Milk’s flag becomes “a dream for us all.” Though he mentions Baker, Sanders spotlights Milk instead as the flag’s mastermind. The text mentions some iterations of the flag but stops short of including those revisions that match identities often excluded from the movement. Still, the visual references to important LGBTQ milestones will make supporters cheer. Salerno’s retro style—detailed but fluid drawings of figures set against paisley-patterned backgrounds—gives fitting, ’70s-era bohemian undertones. The crowds Milk addresses are largely as white as he is, but later illustrations nod to diversity within the LGBTQ population. Photographs of Milk, Baker, and other moments in the movement are appended.

A biography LGBTQ rights activists and allies can proudly share with children.