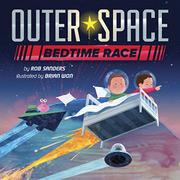 A melding of fact and fiction strives to present a bedtime lesson on the solar system.

Two earthling children drift off to sleep as the book opens, and successive spreads describe the bedtime routines of sleepy little extraterrestrials on Mercury, Venus, Mars, Jupiter, Saturn, Uranus, Neptune and Pluto. Endpapers underscore the title’s reference to a “race” by depicting the planets as first-through-ninth–place medals according to their respective distances from the sun. This seems to refer more to solar years instead of days with regard to the measurement of the time (how long it takes to travel around the sun, versus how long it takes for a day to pass), which muddies the bedtime theme a bit. After all, planetary days are dictated by rotation and vary in length without necessarily corresponding to the annual “race” around the sun. Backmatter entitled “Sleepy Bedtime Planet Factoids” help to ground the text in scientific facts about the planets, but this can’t fully mitigate how stumbling rhymes and twee wordplay grate—“Uranus is a gassy place. / They sleep with masks stuck to each face.” Won’s digital artwork has a retro sensibility. An isolated inclusion of a brown-skinned boy on the second spread smacks of tokenism, since all other representations of human children depict the same Caucasian boys (the children of Neptune display more diversity by comparison).

Stronger bedtime and alien books abound in the universe of children’s literature.