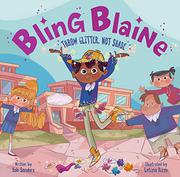 Sparkles are not gender specific.

Say hello to Blaine, a brown-skinned boy who loves things that sparkle. Blaine’s motto is “throw glitter, not shade!” and he embodies it by accessorizing everything from his hat to his backpack in shimmery sparkles. For the most part, Blaine’s classmates, a diverse bunch, embrace the title character’s dazzling accessories and help explain his passion to unfamiliar people by relating it to similar enthusiasms in their own lives. When the haters’ words eventually get to Blaine and bullying starts, the sparkles are abandoned, and Blaine becomes a shadow of his former glitzy self. Blaine’s friends notice the change and fix the problem by wearing their own scintillating accessories and engaging in (implied) in-depth conversations with the haters. The intentions are great, but the story itself creaks, treating Blaine like a plot device and not a real character. His only proactive stance throughout is to offer a sparkly present to one of his detractors as a peace offering, a one-sided gesture, as the kid never apologizes. The bland cartoon artwork does little to enhance the story, and while the diversity of characters is welcome, the use of slits to represent the closed eyes of an Asian student (as compared to every other character’s, which resemble u’s when closed) disappoints. The backmatter introduces readers to the term “ally,” but the subsequent best-practices advice does little to further the conversation.