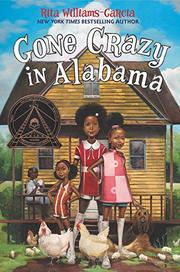 The coping skills of three sisters are put to the test as they leave Brooklyn for a rural summer in 1969 Alabama.

Delphine, Vonetta, and Fern, the sisters who captured readers’ hearts in One Crazy Summer (2010) and P.S. Be Eleven (2013), are off to spend the summer in Alabama with Big Ma. This visit comes at a time of great awareness for almost-13-year-old Delphine as well as looming change in her family. Delphine is still in charge, but Vonetta seeks to step out of her older sister’s shadow. The trip also means the girls will confront their Uncle Darnell, who let them down during his stay in Brooklyn. Hurts and grudges go even deeper as the story of the girls’ great-grandmother and her estranged sister is gradually disclosed, revealing family dynamics shaped by racial history. All the conflicts fade when a tornado threatens an unbearable loss. Character development again astonishes, the distinctive personalities of the girls ringing true and the supporting cast adding great depth and texture. Indeed, the girls’ cousin JimmyTrotter is so fully realized it seems unfair to think of him as secondary. This well-crafted depiction of a close-knit community in rural Alabama works beautifully, with language that captures its humor, sorrow and resilience.

Rich in all areas, Delphine and her sisters’ third outing will fully satisfy the many fans of their first two.