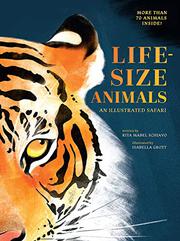 Nature large in tooth and claw.

Ample enough in trim size (double-page spreads are 15 inches high by 22.4 inches wide) to offer a frontal view of a tiger’s face on the cover and full-body portraits within of evocatively named creatures including both the goliath frog and the goliath birdeater tarantula, this album of digital paintings rivals Steve Jenkins’ classic Actual Size (2004) for both realism and visual drama. Along with portraying the jagged dentifrice of a white shark and the eyes of an elephant, a blue whale, and a giant squid from just inches away, Grott intersperses collective gatherings of naturally posed animal relatives in full or partial views, plus select galleries of outsized tongues, claws, tails, and other parts. Schiavo occasionally waxes grandiose in her one- to three-sentence captions, dubbing bats “Lords of the Night,” for instance and, even less plausibly, hummingbirds “Warriors of the Sun.” She also leaves armchair naturalists unenlightened about how a ball python could keep its eggs warm, how a goliath frog’s lack of vocal sacs would amplify its croaking, or the significance of a musk deer’s pointy “primordial” canines. Still, she does offer common names and measurements (albeit and regrettably in English units only) for each subject.

Sketchy text notwithstanding, an eye-filling gallery of creature features.