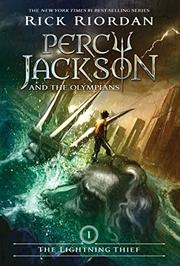 From the Percy Jackson and the Olympians series, volume 1

Edgar Award–winning Riordan leaves the adult world of mystery to begin a fantasy series for younger readers. Twelve-year-old Percy (full name, Perseus) Jackson has attended six schools in six years. Officially diagnosed with ADHD, his lack of self-control gets him in trouble again and again. What if it isn’t his fault? What if all the outrageous incidents that get him kicked out of school are the result of his being a “half-blood,” the product of a relationship between a human and a Greek god? Could it be true that his math teacher Mrs. Dodds transformed into a shriveled hag with bat wings, a Fury, and was trying to kill him? Did he really vanquish her with a pen that turned into a sword? One need not be an expert in Greek mythology to enjoy Percy’s journey to retrieve Zeus’s master bolt from the Underworld, but those who are familiar with the deities and demi-gods will have many an ah-ha moment. Along the way, Percy and his cohort run into Medusa, Cerberus and Pan, among others. The sardonic tone of the narrator’s voice lends a refreshing air of realism to this riotously paced quest tale of heroism that questions the realities of our world, family, friendship and loyalty. (Fantasy. 12-15)