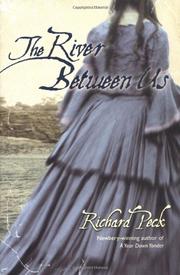 THE RIVER BETWEEN US

“Imagine an age when there were still people around who’d seen U.S. Grant with their own eyes, and men who’d voted for Lincoln.” Fifteen-year-old Howard Leland Hutchings visits his father’s family in Grand Tower, Illinois, in 1916, and meets four old people who raised his father. The only thing he knows about them is that they lived through the Civil War. Grandma Tilly, slender as a girl but with a face “wrinkled like a walnut,” tells Howard their story. Sitting up on the Devil’s Backbone overlooking the Mississippi River, she “handed over the past like a parcel.” It’s a story of two mysterious women from New Orleans, of ghosts, soldiers, and seers, of quadroons, racism, time, and the river. Peck writes beautifully, bringing history alive through Tilly’s marvelous voice and deftly handling themes of family, race, war, and history. A rich tale full of magic, mystery, and surprise. (author’s note) (Fiction. 12+)