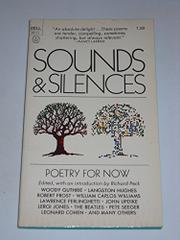 As contemporary as "Sonic Boom" (John Updike) and the Beatles ("Lucy in the Sky with Diamonds," "She's Leaving Home"), this selection of modern poetry is comparable in quality and appeal (if not in appearance) to A Gift of Watermelon fickle. Stages in the human life cycle are the basis for grouping: the Family, Childhood, Isolation, Identity, etc.—twelve sections altogether. Besides poets frequently anthologized (cummings, Hughes, Frost, Sandburg) and poets included in several recent collections (Philip Booth, Leonard Cohen, James Dickey, Denise Levertov, Karl Shapiro, William Stafford), folk singers Tom Paxton and Woody Guthrie are represented. From Wolcott Gibbs' four-year-old son comes a captivating lyric: "He will just do nothing at all./ He will just sit there in the noon-day sun./ And when they speak to him;—/ he will not answer them/ because he does not wish to/ And when they tell him to eat his dinner/ he will just laugh at them. . . ." From the Dissent section comes Donald Hall's bitter observation: "I shot my friend to save my country's life,/ . . . The State (I learned too late) does not exist;/ Man lives by love, and not by metaphor." LeRoi Jones in the group of Love poems has a left-handed compliment "For Hettie": "My wife is left-handed,/ Which implies a fierce de-/ termination. A complete other/ worldliness. IT'S WEIRD BABY." A sound choice—you'll hear vibrations.