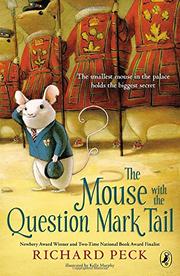 THE MOUSE WITH THE QUESTION MARK TAIL

Peck returns to the parallel mouse society he introduced in the effervescent Secrets at Sea (2011) for a rodent’s-eye view of Queen Victoria’s Diamond Jubilee.

Readers first meet the titular mouse, the book’s narrator, in the Royal Mews. A foundling, he’s been brought up by his “aunt” Marigold, who is fond of aphorisms. “Nameless is Blameless” is one of her favorites, used whenever her young charge asks who he is. Blameless he may be, but that doesn’t keep him out of scrapes. On the run from a couple of school bullies, he finds himself exposed, in his school uniform, on the floor of the royal riding school, where he is noticed by a human—most definitely not the done thing. In short order, he goes from this disgrace to refuge in a horse’s manger to a daylong stint as a Yeomouse of the Guard to the private chambers of Queen Victoria, where he blunders into secret upon secret, including, at the end, his identity. Peck binds this unlikely romp together with his characteristically witty and precise prose, flavored by an endearing blend of humility and superiority that only a British foundling mouse can muster. Details of the mouse world that bustles around and under the human world will enchant lovers of animal fantasy, and clever running jokes provide both humor and continuity (our poor hero is repeatedly asked, “Are you not yet full-grown, or just short?”).