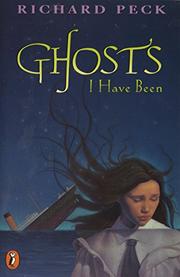 GHOSTS I HAVE BEEN

From the Blossom Culp series, volume 2

So closely does this follow The Ghost Belonged to Me (1975) that at times Peck's sequel on Second Sight verges on déja vu. Once again there's a child-ghost in trouble and once again an eccentric oldster steps in to take Alexander and Blossom on exotic travels. But no matter. This is still a blithe and spirited occult comedy with fewer genuine spooky moments but plenty of out-and-out belly laughs. Plucky Blossom Culp, Bluff City social outcast, in 1914, starts out as a mystic manqué tricking gullible classmates, but then suddenly she starts having honest-to-goodness visions: first of a car accident, then strange flashforwards (even one of the moon landing), and finally a trip back twenty months in time to relive the watery demise of a British boy who sank on the Titanic. For Blossom—and readers—it's a night to remember. She becomes a local celebrity: "Blossom Culp—Pintsize Prophetess," advertises the Chamber of Commerce. ("Her spirit may roam but she calls Bluff City home"). And in the company of dotty Miss Dabney and old pal Alexander, Blossom sails to London where she's immortalized at Mme. Tussaud's and pays a visit to the Queen. Never one for false modesty (on page one Blossom bills herself as "the most famous girl in two countries"), Peck's heroine proves to be such a redoubtable "Seeress" that despite the extravagant self-promotion, she just about manages to live up to the hype.