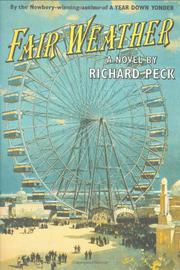 Into the quiet, routinized farm life of 14-year-old Rosie, older sister Lottie, and younger brother Buster comes a letter from Aunt Euterpe in Chicago, inviting them to the 1893 World’s Fair. What ensues is a comic romp as the siblings and their scoundrelly Granddad descend on the World’s Fair, going from the pavilions of the White City to the Midway (in Aunt Euterpe’s words, “a sinkhole of corruption”). The story has a split personality of sorts: at the start, it shows every sign of being a coming-of-ager, with Rosie and Lottie both poised to advance into womanhood. When the party arrives in Chicago, however, the oversized character of Granddad hijacks the narrative. The plot devolves into a sitcom—the major players being the happily unrefined Granddad and Aunt Euterpe (a wannabe member of the gentry who is in perpetual mourning for her dead husband), and, of course, the World’s Fair itself. When he restrains himself, Peck (A Year Down Yonder, 2000, etc.) is a master of evocative prose (“White electricity had lit the world and erased the stars . . . It was Greece and Rome again, and every column and curlicue lit by an incandescent bulb”). And if he goes over the top (both Buffalo Bill and Lillian Russell make wildly unlikely cameo appearances), he does it here with a contagious sense of exuberance. Not up to its promise, but good fun nonetheless. (Fiction. 10-14)