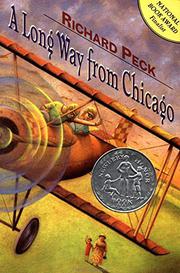 A LONG WAY FROM CHICAGO

From the Grandma Dowdel series, volume 1

In a novel that skillfully captures the nuances of small-town life, an elderly man reminisces about his annual trips from Chicago to his grandmother’s house in rural Illinois during the Depression. When the book opens, Joey and his sister, Mary Alice, nine and seven, respectively, learn that they will be spending a week every August with Grandma Dowdel. In eight vignettes, one for each summer from 1929—1935, with the final story set when Joey’s troop train passes through in 1942, Peck (Strays Like Us, 1998) weaves a wry tale that ranges from humorous to poignant. Grandma Dowdel, with her gruff persona and pragmatic outlook on life, embodies not only the heart of a small town but the spirit of an era gone by. She turns the tables on a supercilious reporter from the big city, bests the local sheriff, feeds the drifters of the Depression, inspires a brawl between elderly (ancient) war heroes, and more. Peck deftly captures the feel of the times, from the sublime bliss of rooting around the ice bin at the local store for a nickel Nehi during the dog days of summer, to a thrilling flight in a biplane. Remarkable and fine. (Fiction. 9-12)